As we drove over the Panama Canal, I could sense G’s excitement and anticipation rising.  He’s been talking about the canal for ages.  Before retiring, G’s dad was a chief engineer on several huge tanker ships and consequently crossed through the canal a number of times.

Panama city rolls out the red carpet for you almost immediately.  You catch your first glimpses of the city crossing the canal from the north.  It truly looks metropolitan with a skyline to match.  It was a bit of a shock after traveling south through Central America.

We soon found the way to our chosen camp spot, an area around Bolboa Yacht Club.  It’s famous for overlanders because of the guard, police patrol, safe streets, laundry and showers.  We were the only overlanders on the first night, but didn’t expect that to last very long.  After getting our bearings, we headed out to end of Avenue Amador, enjoying the views and walkway along the water.  Later that night, George made friendly with the local cops.  We had secured bribes in the form of cans of coke, but the bike cops didn’t want any.  They would keep an eye on the truck because they are nice fellas and it’s their job. Sweet.

The following days involved a lot of driving around Panama City, getting ourselves and the truck ready for the journey to Columbia. George was at the helm considering my no city driving policy. Driving around Panama City is like being in traffic purgatory.  You spend a lot of time and get nowhere.  Using your blinker is like a beacon for fellow drivers to speedup and block you in.  The entire city is one big construction project due to a subway line that is set to be complete sometime in the next year or two.  This is the first subway in Central America.  It’s actually pretty remarkable for a country with under 4 million people.

Although there was a lot to prep, we still managed to squeeze in some sight seeing.  On Monday after doing all we could that day for shipping, we went to check out Casco Viejo (old town) which turned out to be a work in progress.  Half the buildings are boarded up and the other half have been turned into hip flats and restaurants.  Surprisingly, there were so many things to indulge in that it was easy to pass over the boarded up buildings.

That evening we spotted 3 Mercedes vans parked near the yacht club (our camp spot): five adventurous friends traveling together, all northwest US and western Canada natives.  I fell in love with their rigs.  G and I immediately started to scheme about buying and outfitting a similar one once we were back in the land of jobs and weekend trips.

We finally met our shipping partners Tuesday evening.  They came over to the camp spot for an introductory drink which of course turned into many introductory drinks.  George and I had the good fortune to pair up with Karen and Eric (www.trans-americas.com), traveling journalists who have been on the road for 6+ years.  It has taken them that long to work their way through North America to Columbia and South America.

On Wednesday, George and I went to the canal locks for our last bit of sightseeing.  There is a theater which shows a brief history of the canal (the conveniently gloss over the less savory parts), a 3-story museum and viewing areas.  The largest boats coming through the locks have literally a foot to spare on the sides.  They are maneuvered by tugs in the water and trains that run along the sides of the locks.  I was impressed by the size of the container ships and tankers.  George quickly informed me that these were small (and unimpressive) compared to the ships his dad worked on.  Too late George.  I was impressed.

Thursday would be spent getting the trucks into a container, and we were set to leave for a sailboat headed for Columbia early Friday morning. 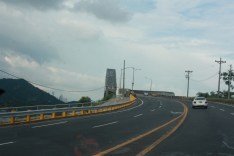 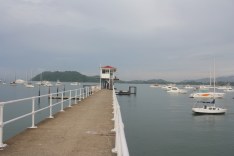 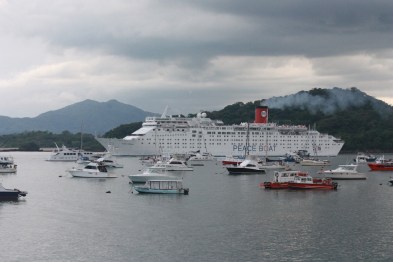 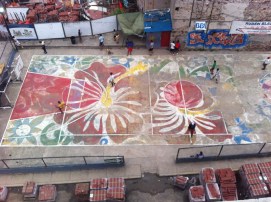 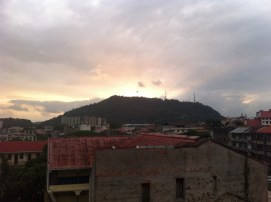 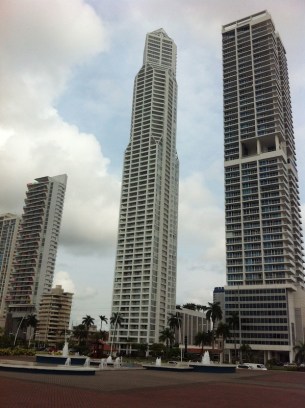 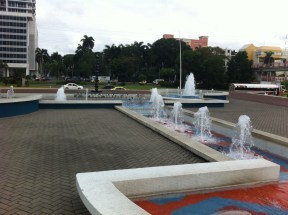 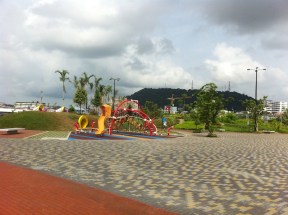 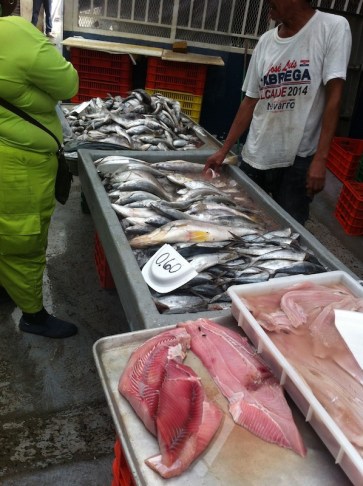 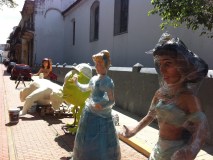 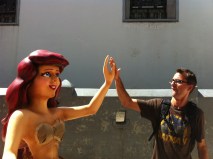 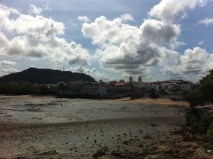 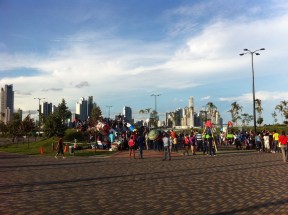 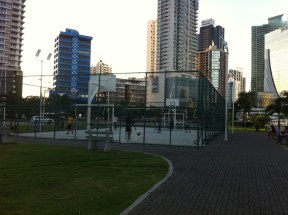 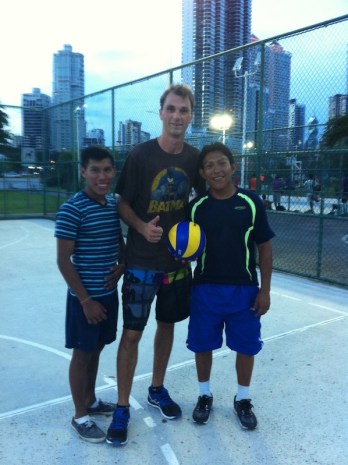 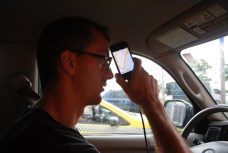 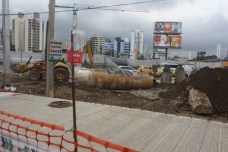 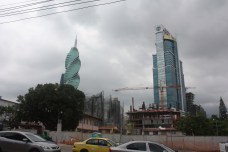 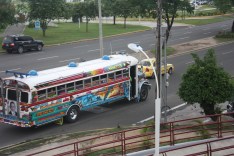 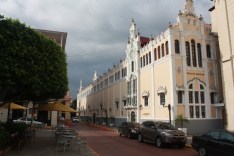 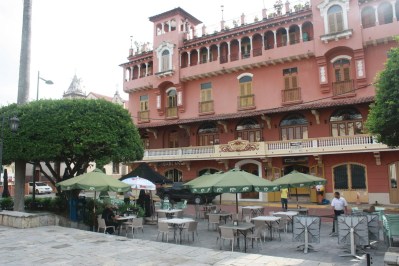 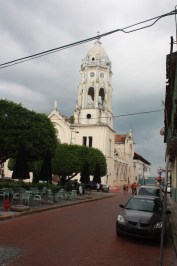 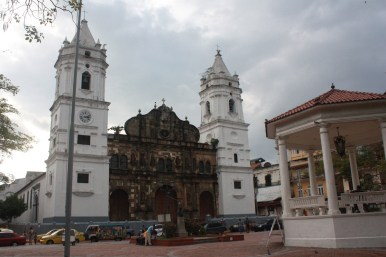 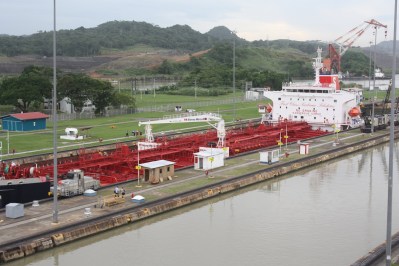 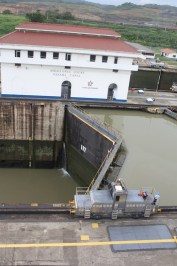 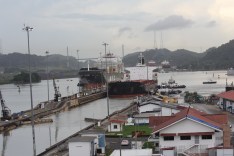 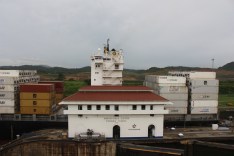 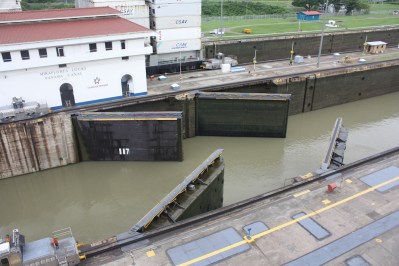 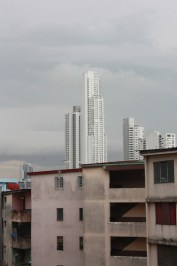 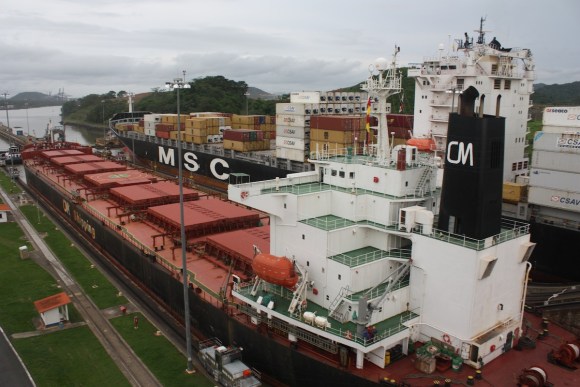