Before hitting the road for the final push to Ushuaia, George thought we needed a big breakfast to help us push through. He prepared Mekitsi which is similar to funnel cake. Guilt-free fried dough is oh so satisfying in the morning. 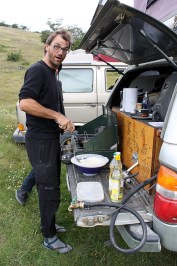 G-man getting his cook on. Check out that counter space. 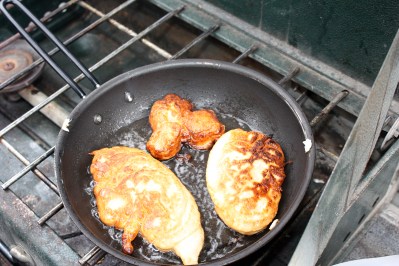 I had one mission on the way down to Ushuaia and that was to see some penguins. The first colony we visited (Pingüinera de Seno Otway) was a 5000 strong Magellanic Penguin population situated north of Punta Arenas along a fjord (-52.980576, -71.230403).

All I could think about was Dick Van Dyke doing his thing in Mary Poppins. The little guys had such character. The lot of us couldn’t help but provide a voice-over for their constant activity. 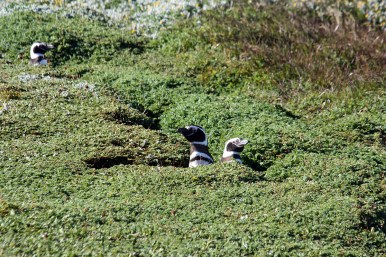 A well-worn path to the water 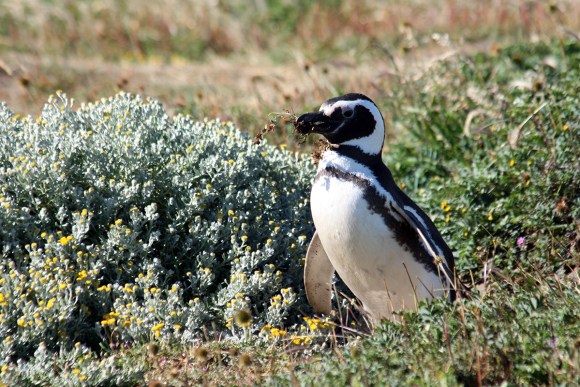 We made our way to Punta Arenas for a few nights to reconnect with the outside world and catch the ferry to Porvenir. Having some time to kill, we sought out the mercado a few times to chow down on delicious fresh fish and crab empanadas. Punta Arenas might be remote and have limited offerings in terms of entertainment, but the seafood fare around town is to die for. 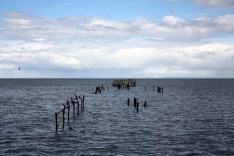 View from the boardwalk in Punta Arenas 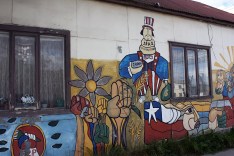 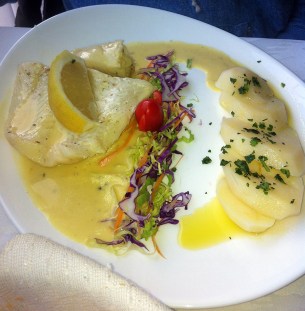 Feasting at the market in Punta Arenas 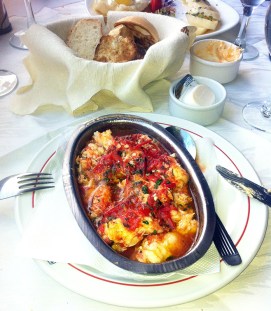 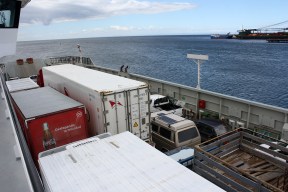 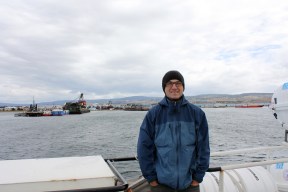 I think this guy is ready to get to Ushuaia too

We had heard from another traveller that there was a King Penguin population near by on Estancia San Clemente. The farm sits on Bahia Inútil (Useless Bay) and is 15km south of the crossroads with the turn-off for Onaisín along the coastal road. Typically, King Penguins are found further south, but the Kings have made this stretch of beach home a few times before in the 60s and 70s.

We arrived at the farm late in the day in hopes that the site manager would let us camp out for the night. There was already a couple of bicyclists there with a tent when we arrived, so are prospects looked good. We pulled in behind a large canvas wall in hopes that it would provide some protection for the howling wind and made a b-line for the penguins. We were blessed with clear skies and soft afternoon light for a visit. That night the temperature dropped and it started to down pour. Combining that with the unrelenting wind and I was finished. It was time to get to Ushuaia and finish this thing. 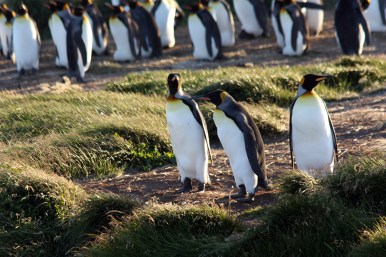 G and I pulled into a hotel for our first night in Ushuaia. It wouldn’t be an exaggeration to say that I was at the end of my rope with roughing it. We curled up with a roof over our heads and made some pasta on our camp burner.

The next day we headed to Camping La Pista del Andino to meet up with the gang. Much food and drinks followed (we were at the end of the road). 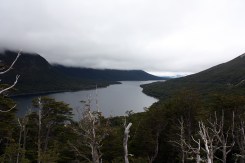 View from the highway into Ushuaia 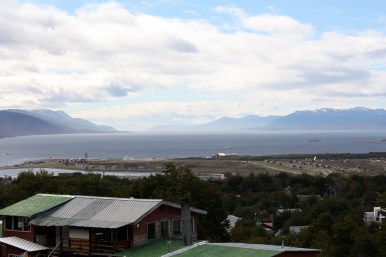 View from the campground

Looking over the Beagle Channel We couldn’t leave Ushuaia without visiting Tierra del Fuego National Park. We hiked a trail that took us alongside Ensenada Bay, the Beagle Channel, and Lapataia Bay and camped at at a free and very beautiful campground on the Lapataia River. The next morning we were in for a surprise. A fox bit chunks out of both our flip flops. In all the months we’ve been traveling and leaving our flip flops outside, this has never happened. The occasional dog will grab one and drop it someone, but that’s it. Those flip flops made it all the way to the end of the road only to be ravaged by one of the local foxes. Ugh. It didn’t matter though because it was time to pop some champagne at the end of the road. 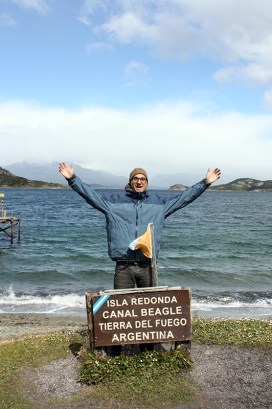 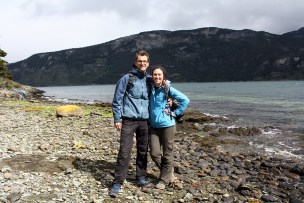 Hike along the channel 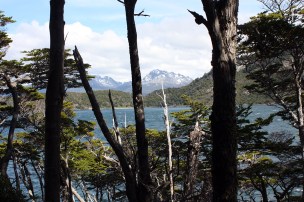 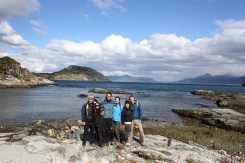 View of Lapataia River in the campground

End of the road 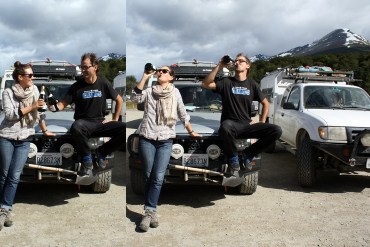 George had his mind set on one more activity before leaving Ushuaia. If you recall, many months and miles ago we took a prop plane to Tuktoyaktuk in northern Canada and had a swim in the Arctic ocean. In Ushuaia at the end of the road, the Beagle Channel was the closest thing we were going to get to the Southern Ocean. I was not as excited about the prospect of stripping down in the biting wind, but George is a stubborn fellow. Finally, I willed myself to put on a bathing suit, and we made our way down to a secluded beach. George ran circles around me to warm up while I shot him death stares, but we went in the water and it was ice cold and numbingly painful. Mission accomplished.